When Dog reads the story of Puss and Boots, he becomes convince that he needs a pair of boots himself.  He soon finds, however, that they make it hard for him to dig a hole while wearing them.  He takes them back to the shoeshop and tries a pair of rain boots.  They prove impractical for swimming.  Dog then tries out flippers, high heels, and skis.  In the end, the shopkeeper convinces Dog that his paws are the best footwear of all.
The illustrations are bright and interesting to look at.  Angaramo is particularly good at showing things from different perspectives.  I like the way, when dog stands at the shoe store counter, je ios looking up at the shopkeeper and the readers is too.

This is not a particularly profound book, but it has a good theme of valuing what you already have and the artistic style is comforting.  The words bear rereading as well.
Schubert, Ingrid; Schubert, Dieter  (2011)  The Umbrella  New York:  Lemniscaat
There are a lot of wonderful picture books being published in the United States every year -- but the rest of the world is producing good work too.  The Umbrella, from the Dutch husband and wife team Ingrid and Dieter Schubert, is simply a beautiful (and wordless) book.  In the book, a black scottie dog picks up an abandoned umbrella and finds himself whisked away high into the clouds, then to Africa, the Antarctic, and other paces.  This work reminds me of David Weisner's book Flotsam. although this book is not quite so far flung in space and time.  It is a wonderful book to just look at.  This one obviously would be good for lower grades, but I could see if being used for a high school creative writing class as well.
Posted by Bill Boerman-Cornell at 11:20 AM No comments:

A graphic novel about the original Marathon runner


Most of us know the legend of Marathon -- how a runner had to cover the distance from Sparta to Athens (27 miles or so) to turn the tide of battle.  Yakin and Infurnari present the rest of the story, how the 27 miles was only the final leg of the 300 mils Eucles had to run over the course of that battle.  This graphic novel moves back and forth from the run to Marathon and the history of the runner at breakneck speed.
The images somehow manage to capture both the desperate speed and the exhaustion of Eucles.  Along the way, we find out what makes him such a determine runner -- and we see that not only in his words, but in his face and his running body.
This is a story that would work in an English class, but also in a Phys Ed class.  The story might be both exciting and inspirational for runners (since I don't run, I can't be sure of that).  The story is understandable to any good reader form fifth grade and up, but some of the vulgar language might mean that it would be best to restrict it to high school (and the teacher should read it before putting it on his or her shelves).
But despite the language, this book is worth getting for your classroom because it may be the book that connects to an athlete who hasn't yet realized that they love to read.  (And for those who do love to read -- the historic aspects, gripping story, and arresting visuals, will make it a favorite. 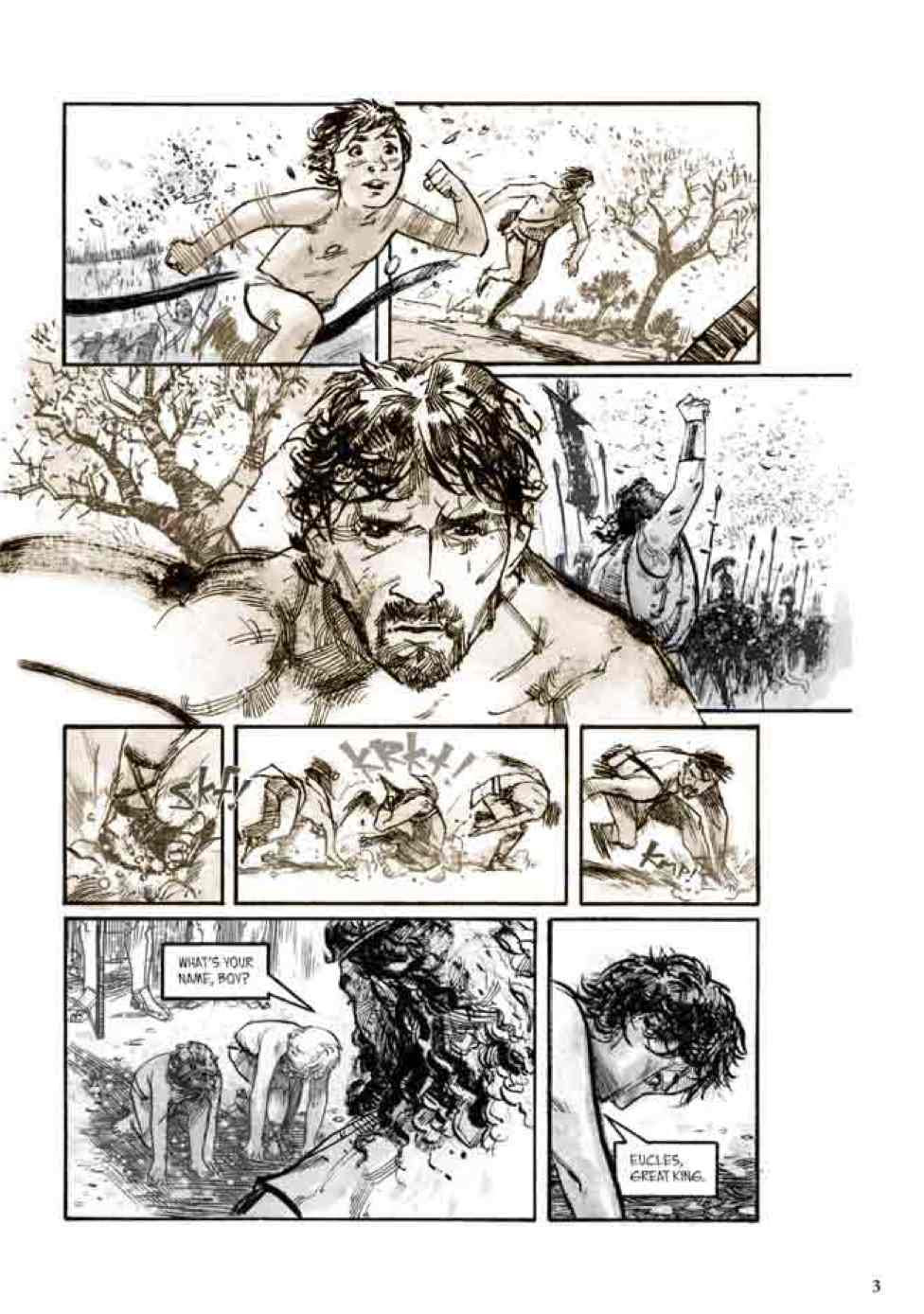 Posted by Bill Boerman-Cornell at 2:21 PM No comments:


I never really thought about it.  Why did Japan join with Germany and Italy to fight against America and the European Allies in World War Two.  I mean, I wasn't aware of any particular grievances that Japan might have had that would prompt something like the attack on Pearl Harbor.
In this brilliant (and rather weighty at 533 pages) volume, Shigeru Mizuki puts that decision in context by giving details about Japans economic and political struggles in the years leading up to the war -- including the rise of a new kind of nationalism.  Mizuki alternates between chapters that read a bit like traditional expository history texts and those that are more like Mizuki's memories of being a child during that time.  Over the course of the book, this has the effect of giving the reader both an overview of the bigger picture stuff, and a clear empathic connection with the everyday people who are affected by the political and economic decisions of the leaders of Japan and other nations.
This book is written in manga style (it reads left to right and uses some of the symbols and conventions of manga).  It takes an adjustment if you are not used to reading Manga, but it usually just takes me a couple of page and I forget that I am doing anything different.  (I don't usually read manga -- not because I dislike it, but because it is all I can go to keep up with traditional graphic novels.  There is just too much manga for me to ever hope to catch up on.  Sigh.)
The artwork is beautiful.  Mizuki uses mostly pen and ink but combines different styles and sometimes uses photographs in combination with his drawings.  The effect can be breathtaking. 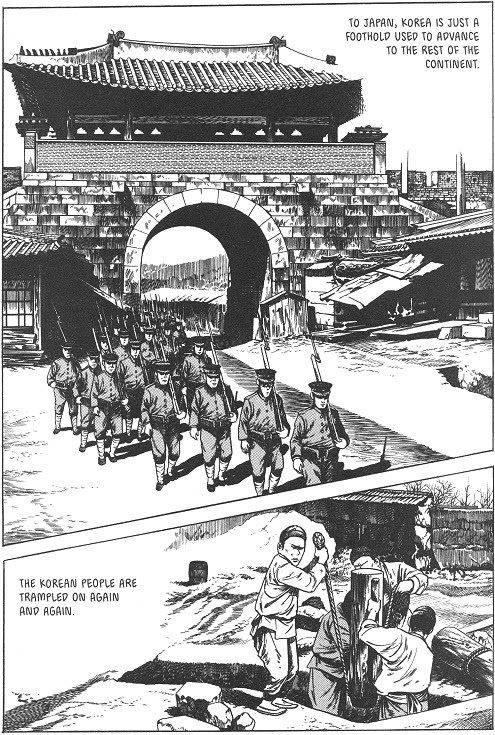 Mizuki seems to be a remarkable historian.  The book contains enough footnotes to satisfy even the most intense history professor and the book does a nice job of providing chances for students to contextualize, think critically about the sources of information, and  contrast different points of view.
Over the course of the 533 pages, Mizuki includes a handful of vulgar moments (mostly when recollecting his middle school years.  This includes some mildly offensive language and a scene where some immature boys play interact with their own defecation.  None of that should be too much a problem for the high school reader (and this book would be a difficult haul for anyone younger than a freshman.)  If you teach History of English, this would be a good one to get hold of.
Posted by Bill Boerman-Cornell at 9:16 AM No comments:

Graphic Novel about post-apocolyptic talking pigs in the arctic!


I have never been a fan of exposition.  I prefer books that jump into the story and let the reader figure it out on the fly.  Glacial Period is a graphic novel that does just that.  On the first page we meet the main character, an intelligent pig in glasses named Hulk.  On the second and third pages we find out from the context that Hulk is part of an expedition of humans searching for artifacts from a lost civilization that has been covered up by an ice age.  A few pages further in we come to understand that the civilization that has been covered is our own.
As the expedition moves on, we experience rivalries between members of the expedition, love and
jealousy for Juliette, daughter of the wealthy but handicapped man who is bankrolling the expedition.  When Hulk gets left behind and discovers the entrance to an ancient art museum, things really start to get interesting.
The images in this book seem to be ink drawings colored by what appears to be watercolors.  The desolation of the glaciers comes through clearly  It is some beautiful work.
.

This book could only work on the high school level -- and teachers should be aware of some potential pitfalls.  There is some vulgar language in the book (though it is used sparingly).  There are also several scenes where classical paintings come alive, which involves some nudity.  None of the nudity is meant to be arousing in any way, So it could result in some challenges, and the message of the book is somewhat obscure -- but it is still an excellent book that is fun to read (You might just want to get it for your personal collection.)
Posted by Bill Boerman-Cornell at 11:07 AM No comments:

A Cynthia Kadohata novel about harvesting grain in the midwest?

I had read Cynthia Kadohata's Kira-Kira and absolutely loved it.  When I picked up The Thing about Luck I am not sure what I was expecting -- but I wouldn't have guessed it was the story of a 12-year old girl obsessed with malaria and mosquitoes who, along with her possibly autistic brother Jazz is spending the summer helping her grumpy grandparents prepare meals for a travelling crew of grain harvesters.  I also wouldn't have guessed that that girl  would, at some point in the book, need to operate a 3000 pound combine.  The romantic sub-plot with a farm boy I could have anticipated though.
Here are the opening lines:
"Konun is "good luck" in Japanese, and one year my family had none of it.  We were cursed with bad luck.  Bad luck chased us around, pointing her bony finger.  We got seven flat tires in six weeks.  I got malaria, one of the fifteen hundred cases in the United States that year.  And my grandmother's spine started causing her excruciating pain.
"Furthermore, random bad smells emanated from we knew not where.  And my brother, Jaz, became cursed with invisibility.  Nobody noticed him except us.  His best friend had moved away, and he did not know a single boy to hang around with."
As with Kira-Kira it is a delightfully written book.  This one is a bit more quirky than Kira-Kira, and may take a little bit longer to get into, but it is a strong book.  I would probably suggest starting readers out on Kira-Kira, but once you know they have loved that one, this book would be an excellent follow-up.  I would say this book is probably best for fifth-grade and up.
Posted by Bill Boerman-Cornell at 9:49 AM No comments: