Little Robot, the new book by Ben Hatke, comes out September 1 (and it is really good!) 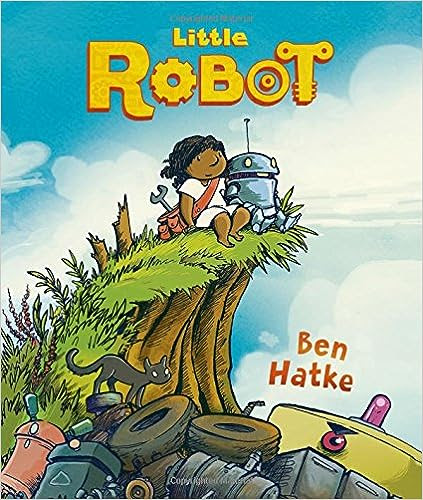 First lines:  Well, actually, the first 25 pages don't have any words at all.  So I am not sure I could say that this book has any first lines.

But I can tell you how the book opens.  As a truck crosses a bridge at night, it hits a bump, and the rear door slides open.  A box falls out and bounces off the road and into the river.  The next morning an African-American girl  wearing a nightshirt, climbs out of a window in a trailer park, and wanders off in search of something to do (and someone to play with).  She eventually ends up down by the river where she finds the box, opens it, and finds a robot who doesn't even know how to walk yet.  Armed with her toolbelt, she eventually overcomes her fear and helps the robot learn how to walk.  Before long, however, the robot factory notices the robot is missing and sends out a huge and scary looking retrieval robot.  Can the girl help the robot evade the danger?

Here is the thing about Ben Hatke, he tells what seem to be very simple stories, and then you get into them and find out there is a lot more to the story than you thought.  In this book, Hatke somehow subtly weaves in themes of what it means to be a friend; how friendship can cross lines of diversity and even language; the connections between learning, growth, and building; and even what it means to be human and alive.  As he did in the Zita the Spacegirl books, Hatke also gives us a heroine who is not only strong and resourceful, but also feels a range of emotions (with Zita, that meant she sometimes actually cried.  With this unnamed heroine, she is clearly frightened and scared sometimes -- but she overcomes her fear when she needs to.

Hatke also gives us amazing images.  One of my favorites is the little girl, in her tee shirt and toolbelt, dancing with Little Robot (who looks kind of like an animated trashcan).

It is hard to figure out the ages this book is intended for (in my mind, that is always a good sign).  I think four year old pre-readers could make sense of it, but I also think elementary, middle school, and even high school kids could get a lot out of it.

Bottom line:  This is one of my favorite books so far this year.  You really need to get hold of it.


Posted by Bill Boerman-Cornell at 2:51 PM No comments: 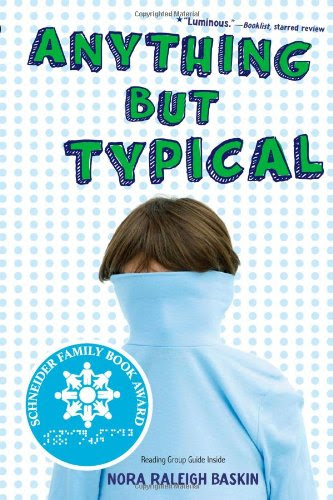 Opening Lines:  "Most people like to talk in their own language.  They strongly prefer it.  They so strongly prefer it that when they go to a foreign country, they just talk louder, maybe slower, because they think they will be better understood"

Jason Blake is a twelve-year old kid.  He really likes to write.  He posts his stuff on a writing website and reads stuff that other writers post.  It is on that site that he meets PhoenixBird, a giel his age.  He encourages her in her writing and chats about school.  When he finds out that she is gong to the same children's writing convention ) sponsored by the website) he is excited, then scared, then wants to call it off, then wants to go.  Jason wants to meet her, but worries that if they meet, nothing will ever be the way it was before.  This story has echoes of the play Cyrano DeBergerac in which a talented poet with a grotesque nose, uses his words to woo a woman he loves..  Like that play, the ending is not a happily-every-after ending, but rather an ending that is more real than that, yet somehow still satisfying.

I really enjoyed this book, despite some moments when the dialogue seemed inauthentic.  For example, at several points in the book, girls, when seeing Jason acting out some aspect of his autism, respond by saying "Gross!"  Now I am the first to admit that kids can be cruel and insensitive, but I have also seen when I visit schools that because we no longer segregate students with autism, it really isn't such a big deal.  And I also think that when kids are going to be cruel, they can be a lot more subtle than saying "Gross!".  However, apart from a few moments like that, it is an interesting book.  While it could work for studying in a fourth, fifth, or sixth grade classroom, I think it would work best as an addition to a classroom library.

Posted by Bill Boerman-Cornell at 11:50 AM No comments: 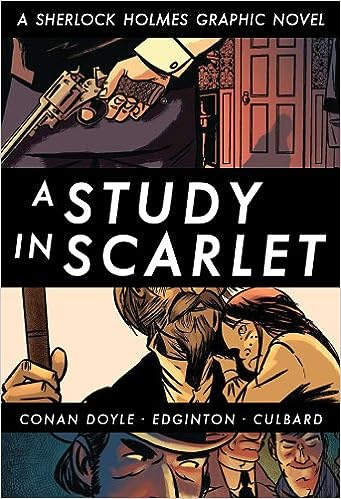 Opening Line:  "In the year 1878, I took my degree as a doctor of medicine at the University of London before proceeding to Netley and the course prescribed for Army Surgeons."

That line, uttered by John H. Watson M.D. is the first line ever written by Conan Doyle in the first story about Sherlock Holmes.  It is a part of a wonderful and fascinating story called "A Study in Scarlet".  But as you can tell by that line, it is not exactly written to be accessible to young readers.  Culbard and Edginton provide visuals that add a level of understanding to the words.  The majority of the book stays true to Conan  Doyle's original language and opens up the story so studnets can appreciate it fully.

The story begins with Dr. Watson's first meeting with Sherlock Holmes and theier agreement to share an apartment.  Before long, Watson is brought into a case that Holmes is working on -- a case involving a dead man, no witnesses, and the word "Rache" written on the wall in blood.  Watson tags along as Holmes uses his remarkable analytic powers to discover the story of this murder.  The twists and turns along the way (a lead suspect is murdered, and the murderer turns out to not be the villain everyone is expecting.)

This book is ideal for fifth or sixth grade and up, both for studnets who find Holmes intriguing in his own right, and for those who have seen the PBS Sherlock series and want to find a way into Conan Doyle's work, this graphic novel version is an excellent way to start.Look at the way a simple illustration of Holmes brings energy to a rather d=pedantic text int he panel below.  Then get hold of the book.  It is a good one. 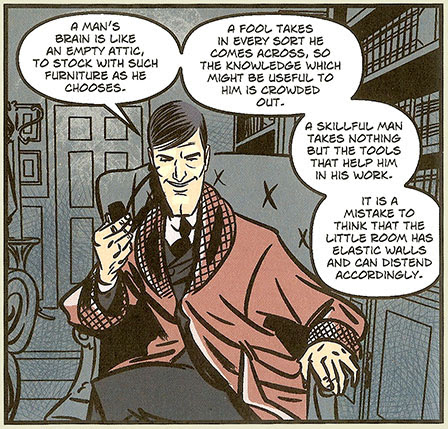 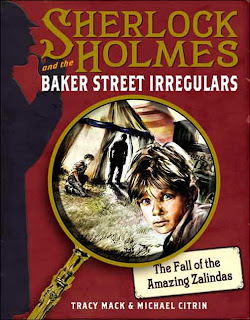 Opening Lines:  "Ladies and gentlemen, lads and lasses, I take you now to the dangerous heights of the tightrope -- the boldest show  act of all time some twelve spans above us."

Throughout the Sherlock Holmes stories, Holmes employs a group of street kids to track murderers, gather information, stake out buildings, and other tasks.  Although the irregulars are never major characters int eh Conan Doyle stories, they are often pivotal in solving a crime.  Mack and Citron have fleshed these young characters out, and as such, they make an excellent doorway for your readers into the world of Sherlock Holmes.  Wiggins, Ozzie, Rohan, Alfie, and the girl Pilar all are the ages of young readers and as they are drawn into a Holmes case in which the fate of the British Empire depends upon finding a single book, The near misses, death-defying escapes, close calls, and desperate situations that follow will keep readers focused on the story through to the end.  This book seems best for fourth grade and up,  There isn't enough here thematically to make the book worth a class study, and it probably doesn't have enough universal appeal to be a good read-aloud, but it would be an excellent addition to any classroom library,