Opening lines:
"They fire off a round of texts at me at five minutes after midnight:
We're coming.
Get ready.
They're not threats, but my friends have a way of making even the simplest demands feel like ultimatums."

Bailey is in a car with Cliff Grosso when he gets a DUI and loses his scholarship and because she is not very popular, everyone blames her for ruining Cliff's life.  Then one night Bailey leaves a party and Cliff leaves right after she does.  Bailey never makes it home.

This is the set-up for Little Monsters.  The novel is told through alternating chapters narrated by Kacey, her friend Jade, and sections of Bailey's diary.  This is a murder mystery so well-plotted that it will keep the reader rivited to the end -- if the reader can stand to hang in there that long.  This book is well titled.  Kacey moves through a world of jaded, cynical, unhappy girls.  They are cynical about school, family, their community, each other, and the future.  And Kacey is not much different.  She sums it up this way:  "There is no such thing as best friends.... Everyone is only out to protect themselves."  The epilogue contains a grain of hope, but make no mistake, this is a world of monsters.

So what is wrong with that?  Aren't books supposed to tell the truth?  To be authentic?  High school girls can be pretty monstrous.  Aren't there some girls out there who would jump at a chance to read a book that shows them the world as they understand it?  A book that shows unflinchingly the worst of what humans can be to each other?  Don't we sometimes read to know that we are not alone?  Isn't the world like this sometimes?

Yes, all those things are true.  And yes, high school students use vulgar language, engage in under-aged drinking, cut themselves, have sex, talk about each other as if they were no more than the sum of their attractiveness or unattractiveness to others, and betray their friends.

But I don't relish spending time with such people.  I certainly don't mind books that show the pain of being a human, but I also read to know that all worlds have some degree of hope in them -- that there is always the chance things will get better.  And honestly, at the end, there is some hope to be found, but it comes so late and there is so little hope that at that point, the book had worn me down and I didn't want to spend any more time in this world.

Lurie Anderson's now classic novel Speak certainly paints a dark picture of life for high school girls -- but there is a moment in that book where the main character returns to a bathroom stall where she has written something truthful and negative about the boy who date-raped her, and finds the stall wall covered with affirmations and corroborations of what she wrote.  That moment is one in the book where there is a lot of hope that eventually the truth might come out.  I do not find such a moment in this book except at the very end, and then it is muted.

It may be the result of my overly optimistic nature, and I can think of some students who might like this book, so if this sounds like a book you would enjoy, you might want to pick it up.  I would have a hard time recommending it, though. It could be used to prompt an interesting discussion in language arts about what makes a book worthwhile, and whether it is necessary for books to offer hope.

It is clearly written for a high school audience.  The vulgar language might easily lead it to be challenged, however, so I would encourage teachers to read it before putting it in your classroom library. 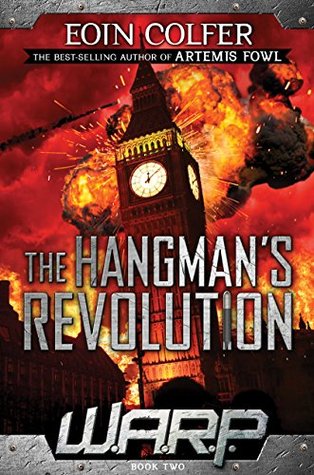 Opening lines:
"Boxite Youth Academy, Present Day London.  New Albion.  115 (Boxite Calender)
London Town.
Once there had been a magic about the city.  Just hearing the name conjured images of Dickens's young trickster Dodger or of Sherlock holmes in Baker Street putting his mind to a three-pipe problem, or of any one of a thousand tales of adventure and derring-do that were woven through London's magnificient avenues and shadowy network of backstreets and alleys. For centuries, people had journeyed from across the world to England's capital to see where thier favorite stories were set, or perhaps to make thier fortune, or maybe to simply stand and gaze at the wonders of Trafalger Square of Big Ben.
Not anymore.  The days of magic were long gone."

Cevron Savano, 17 year old FBI agent, and Riley, 19th century London native and budding stage magician, are back in this sequel to The Reluctant Assassin.  In this second book of the WARP series, Chevie returns to the 21st century to find that everything has changed.  The world is now run by a dictator named Colonel Box and Chevie is now one of his soldiers, about to be interrogated under submission of treason.  There is a part of her brain, though, that knows that something is wrong and eventually she escapes to Riley’s London, where the two of them hope to stop Colonel Box before he can seize control of the world.

There are no important themes here (though the book will set you thinking), and no profound character development.  This is a wonderful, rollicking action/adventure ride with plenty of surprises, explosions, trips through the London sewers, temporary allies, anachronistic weapons like tanks, zodiac boats, and cruise missiles in the London of 1899, chase scenes, near escapes, moments when all appears lost, unlikely love interests, and victories of bravery, subterfuge, and cleverness.
I like that Colfer has included both a male and a female protagonist and suspect that male and female students will like this one.  Other than violence, there is nothing objectionable here.  This book seems suitable for students in grades four and up. If you want a fun thrill ride of a book, I recommend this one. It might be an interesting diversion for a physics or science class as the discussion of time travel is complex and brings up some interesting questions -- but for a language arts class-- there isn't much going on here thematically.
Posted by Bill Boerman-Cornell at 2:52 PM 1 comment: