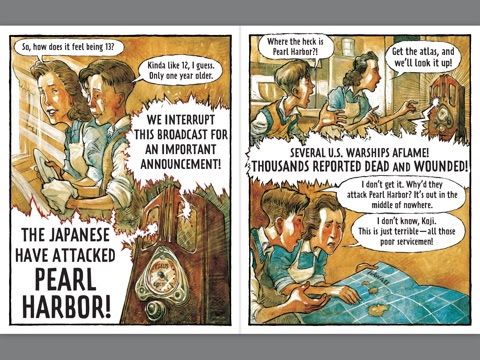 This graphic novel follows the life of 13-year-old Koji Kiyamoto.  Koji lives in San Francisco with his mom.  His Japanese father is overseas.  When Pearl Harbor is bombed, Koji starts being bullied at school, then the authorities confiscate the radio, and then finally, Koji and his mom get a letter that he is being taken to a relocation camp.
After Koji runs afoul of a gang of boys who ridicule him and call him gaijin (Japanese for foreigner) because of his mixed-race ancestry and gets in a fight, the camp commander assigns him to be an assistant to Mr. Asai, a Japanese man who fixes things in the camp.  When Koji accompanies Mr. Asai to his house on a day pass, they find that the couple renting Mr. Asai’s house have taken it over, broken into his storage room, and stolen and sold his stuff.
Later, though, Koji’s affection for Mr. Asai is tested when the gang peer-pressures him into throwing a dirt clod at Mr. Asai.  And the bottom line of this graphic novel is that it is as much about Koji growing up and grappling with divided loyalties as it is about the way the United States handles (or mishandled) the treatment of Japanese –American citizens. Koji is also worried that his mom is spending time with the American guards at the camp and is being unfaithful to his father.
In an afterward, Matt Faulkner tells the story of a great aunt of his who fell in love with a Japanese man, married, moved to Japan, then, an earthquake in Tokyo caused them  to move back to Boston.  After the bombing of Pearl Harbor, they got a letter saying that her husband and children would be taken to an internment camp.  Though Faulkner’s aunt (who was Irish –American) was not required to be interred, she chose to go to the camp with her family.  This became the basis for Faulkner’s graphic novel.
Generally, this is a good book.  The drawing is strong, though the caricature-like style that Faulkner employs at times made it hard for me to fully invest myself in the main character.  Also, the lettering is clearly typeset, which makes the voice of the novel seem stilted and sterile.  Some readers may take offences at the repeated use of the term “Jap” to refer to Japanese American characters in the book.  Overall, though, the story realizes important questions we still struggle with today, including, what it means to be an American, including how we treat those who look different from us, and what it is like to be an outsider. Faulkner’s book teases these ideas out over a variety of narrative turns.  The ending seems a bit rushed, but is still satisfying.
This would be a good acquisition for a classroom library and might also work well as a supplemental book for classes studying the Japanese iInternment Camps in World War Two.

Opening lines:  “Just a minute there,” the recruiter stops me as I lean over to dip the pen in ink.  “You can’t enlist.”
I freeze.  Can he tell?  I’m wearing a shirt, vest, and trousers as usual.  My curly hair cut short except for a lock that insists on falling over my forehead.  I brush it away nervously and meet the man’s eyes.  I’ve been passing for nearly three years now, but every new encounter still brings with is the same fear.  I take nothing for granted.  The key thing, I remind myself is not to reveal anything, to act as normal as possible.
“I beg your pardon,” I say as if I haven’t heard him clearly.  I keep my voice calm and low, pushing down the panic that’s building up inside me.
“I know you love your country,” the man says kindly. “but you need to grow up a bit before you join the army.”  He looks at my peachy cheeks, free of any sign of a whisker.  “We aren’t taking sixteen-year-olds.”
Eventually, though, Sarah Edmonds, AKA “Frank Thompson” joins the Union Army.  As she marches off the war we begin to slowly learn about her early life with an abusive father in Canada.  We find out what drove her from home and prompted her to disguise herself as a boy.  We find out about how she kept herself alive by doing odd jobs and eventually becoming a book salesman, and we find out why she wanted to enlist.
Frank is affable and funny and a hard worker.  As we follow Frank through serving as a soldier, mail deliverer, spy, and nurse, we get to know the other soldiers, experience some of the important battles of the civil war, learn about daily life for soldiers, and most of all become more and more invested in Frank’s life.  At several points, she is almost discovered to be a woman.  She also falls in love with her fellow soldiers more than once and must hide her feelings.  In this book readers will find adventure, history, and some interesting ideas and themes to think about.
While teachers will want to know that the book contains some mild and very occasional vulgar language, they should also know that it is a gripping book that will engage readers deeply.  It would probably work best for high school students, but skilled and adventurous middle school readers might want to give it a try as well.  Though some boys eschew books with female narrators, they might want to give this one a try.  The descriptions of battles and spy missions are enough to hold the attention of action/adventure addicts. Moss includes excellent supplemental materials including biographies of generals, a civil war timeline, bibliographies, and an explanation of who the real Sarah Edmonds was.


Excellent for your classroom library or for use in conjunction with a unit on the American Civil War.

Opening Lines:  “Ada!  Get back from that window!”  Mam’s voice, shouting.  Mam’s arm, grabbing mine.  Yanking me so I toppled off my chair and fell hard on the floor.
“I was only saying hello to Stephen White.”  I knew better than to talk back, but sometimes my mouth was faster than my brain.  I’d become a fighter, that summer.
Mam smacked me.  Hard.  My head snapped back against the chair leg and for a moment I saw stars.

It is 1939 in London.  Ada is ten years old.  Ada has a club foot.  Because her mother is ashamed of this physical difference, she abuses Ada physically and emotionally.  Ada is never to go outside and always to stay away from windows.  Ada’s younger brother Jamie, who is 6, is allowed to leave the house and play with his friends in the streets.
When World War Two breaks out, and London is threatened with bombings, the government orders that children be evacuated to the country.  Mam intends to send Jamie to the country, but keep Ada in London, since Ada is an embarrassment.  Instead, Ada and Jamie both escape and are sent to the country.  Once they arrive, all the other children are claimed, but not them.  Jamie and Ada are dirty, poorly dressed, and lack manners.  Eventually the woman coordinating the resettlement in the town sends them to live with Miss Smith who lives on the edge of town.  Miss Smith is not excited about taking them in.  It turns out that Susan Smith lived in the little cottage with her best friend Becky, and since Becky has died, Miss Smith has been in a state of grief and depression.  At first, Ada and Jamie take care of the cooking and cleaning, and Susan seldom leaves her bedroom.  Eventually, though, she begins to take a hand in the kid’s upbringing.  Ada, who has never known what it is like to walk without pain, learns the joy of riding a horse.  Miss Smith remembers what it is like to care for another person and slowly they begin to build a new life as a kind of family – but the war, bombing, Mam, and other conflicts threaten.
And like many great books, the summary of this book does not convey what it is like to read it.  This book is delightful, and soon the reader is drawn into the little English town and is rooting so hard for Ada and Susan that the book becomes all encompassing.  I would say it will have you turning pages faster and faster to find out what is going to happen, except the writing is so good that it will slow you down so you can enjoy it.
It would be a excellent book for a middle school or high school History class to be able to personalize the war and help student to understand what it was like for non-combatants at the time. It is also well-written enough that it would be an excellent addition to a middle school or high school English/Language Arts class.  And it would make a splendid read-aloud book.
It may be worth mentioning that there are very subtle yet clear implications that Susan and Becker were lovers, however, if the teacher does not focus on this, the majority of high school or middle school students will fail to make the connection.  Still, teachers should be aware of this.
And what a splendid ending.  Look, you should buy this and read it yourself if you do nothing else.

Opening lines:  “July 10.  Usually I start a brand new journal with a brand new postcard, a picture of where I’ll travel to next.  But this time I’m starting with a drawing of what’s right in front of me, because it’s pretty spectacular.
“Much better than looking right next to me, at my oh-so-furious brother.  We’re finally doing something fun, taking a ride on the giant Ferris wheel in London and he looks ready to kill me.”
This is part of an ongoing series in which Mira travels through time, trying to find her mother (and defeat the mysterious watcher who is working against them.). In this one, Mira must journey back to San Francisco just after the great earthquake.  She gets a job as an entertainment reporter and rubs shoulders with Mark Twain, finds her mother, another time traveler, and the watcher.  Along the way she is continually orienting herself based on her knowledge of both modern and historical San Francisco.  Her knowledge of history helps her out more than once.  The book does a nice job of showing that history happens in neighborhoods and cities where people carry out their regular day-to-day lives.  There is also a strong freedom-of-speech, anti-censorship theme. There is also the beginning of a romance happening.
While this book is perhaps not as gripping as Moss’s A Soldier’s Story, it seems like a good way to engage late elementary or middle school students in beginning to think aobut their world from a historical perspective. I have not read the other books in the series, but suspect they also would serve this purpose well.
Posted by Bill Boerman-Cornell at 1:23 PM 1 comment: