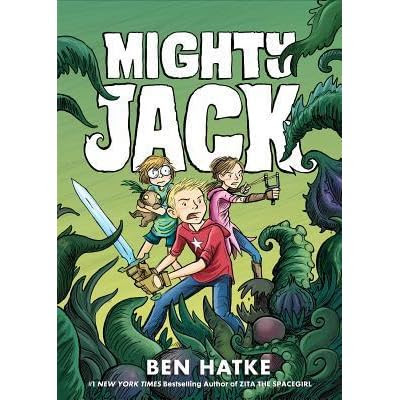 Look, just go get this one.  Right now.  Preferably from an independent bookstore in your area -- but otherwise from Amazon.  Go now.

Why havn't you gone?  What are you waiting for?  You think I am kidding? This is Ben Hatke we are talking about!  He does an excellent job with the graphic novel form, and boy, does he know how to weave a good tale.  Seriously.  And I love the way it is possible to fall right in to the world of his books, wander around for a while, have some adventures, and then come out again in time for dinner.

All right. Fine,  A plot summary?  Really?  Won't take my word for it, huh?  Okay, so there is this kid named Jack.  Summer is beginning, but since his mother has to work, his dad isn't on the scene, and his little sister, Maddy, is autistic, it is Jack's job to watch over her.  When they are at the farmer's market, a guy sells Jack some magic beans in exchange for the keys to his mother's car (the con artist will look awfully familiar to readers of Hatke's Zita the Spacegirl series).  Police recover the car eventually, but Jack's mom is angry.  Eventually Jack and his sister plant the seeds in the backyard and this crazy alien garden grows and soon both of them (and Lilly, a neighbor girl who likes swordfighting) are battling plants with tentacles, exploding plants, and something far harder to get rid of.

Well, yeah, sothe book is incomplete.  So what?  It leaves you waiting for the sequel.  That isn't a bad thing.  It gives students something to look forward to.

Seriously,  Graphic novels this good don't come along every day.  Go get it.

Nothing objectionable in this book -- just awesomeness.  No, listen, you can thank me later.  Just go get the book!

Opening lines:  "Listen.  I'm going to tell you a story -- a story about me.  But I am telling you so you'll remember -- remember about you.
I wasn't that thrilled about moving, but I downright dreaded Stately Academy."

Hopper is a new girl at Stately Academy.  Though she has trouble fitting in, she is more troubled by the angry janitor who yells at her and the creepy birds that seem to be staring at her.  When she finally finds a friend, Eni, and then she finds a robot in the janitor's shed and at the same time, she also finds a mystery.  One that will require math and logic to solve.

And maybe that part scares you, because you have read other graphic novels that try to weave mathematics into a story and you fear that this one will be clunky too.  And honsetly, maybe it is a little clunky here and there, but Gene Yang is such a gifted graphic novel artist and so skilled at telling a story through words and pictures that it is unlikely you will even notice the clunkiness -- even as you are subtly being taught how binary programming language works, and how to code directions for an ambulatory robot.  This book is well worth getting for your classroom, even if you don't teach math.

I would recommmend it for fourth grade and up.  There is nothing in here that would be problematic for marents or community members that I noticed. This is a good one.  Well worth buying.

Opening lines:  "Hey, here's a good one...  The Mysterious Zeke Heainey Incident by Ivan Gadunt.  Pine Mountain, Georgia -- On a cool October night, a full moon shone brightly over the tall Georgia pines.  It was one of those cold nights that stories are written about... stories told around campfires on other cold nights, under less impressive moons.  On a lonely country road, an even lonlier old pickup truck rambled along, down the lonely road of destiny.  Zeke Hainey was returning from a weekend hunting trip, his only companions:  a cuo of bad coffee, his old hunting dog, and a fading radio station.
Aw, c'mon!  Stop the boring stuff and start reading the good parts, will ya!"


Red tries to run away from her latest foster home and is apprehended by a police officer, who puts her in the back of his prize vintage cop car.  Then that car is taken away by aliens looking for collectables and Red finds herself on a distant planet alternately excited and fascinated, scared, and having the time of her life.  She meets some rather odd friends along the way and maybe finds a home.

The art in this one is a slight characature style, funny, but real enough not to be distracting, The book is fascinatingly told and is often kind of funny.  Readers and young as fourth grade might like this one, though some of the humor will go over their heads.  I found nothing in this book likely to get it challenged or banned.  I recommend buying it for your classroom library.
Posted by Bill Boerman-Cornell at 3:27 PM No comments: