Weapons of Math Destruction, Kid versus Captain, and the Incarnation of War looks for Love

I got lost in some excellent science fiction and fantasy novels the last couple of week.  I have got some excellent graphic novels on deck, but first, some good old fashioned SF/F stuff.

Opening lines:  Lilly's lamp blew out as she bolted down the hallway.  She threw the lamp aside, smashing oil across the painted wall and fine rug.  The liquid glistened in the moonlight.
The house was empty.  Silent, save for her panicked breathing.  She had given up on screaming.  Nobody seemed to hear.

This book is by far the best book I have read so far this year.  The story takes place on a world very similar to ours, only the United States is a grouping of islands and the main focus of society is fighting the wild chalklings who are ravenously destructive neasts that are confined to the isle of Nebrask.  The human army keeping them at bay are Rithmatists, who can use a kind of geometry-based magic (yes, you read that right) to keep the chalklings under control.  Joel is a remarkably smart boy who does poorly at school and is really interested in the Rithmatists, even though he is not one.  When he gets a position working as the assistant to a kindly Rithmatist professor for the summer, Joel meets Melody, herself a failing Rithmatist and soon all three of them become involved in a murder mystery with serious implications for the continued survival of humans.

This book keeps you guessing about who the bad guy is (and the ending is satisfying in that you might be able to guess part of it, but by and large, you won't see it coming)  Joel is an excellent protagonist as is Melody, once you get to know her.  And it turns out that geometry is actually pretty fascinating when it is a matter of life and death.  This is a book where there are clear divisions (and some fuzzy ones too) between the forces of good and evil and you will find yourself rooting hard for the good guys.  It has a hint that something romantic might develop between Joel and Melody -- just enough to be intriguing but not to distract from the story.

I know some smart fourth and fifth grade readers who would enjoy this, but it is really ideal for sixth grade and up.  And for math teachers looking to build up their classroom library -- run to your local independent bookstore and buy it today.  Your students will love it (but you will love it even more).  In fact, you might consider using it as a read aloud.  There is nothing particularly offensive int he book, though it is scar in some portions and occasionally the violence is pretty graphic.  Nothing compared to prime time television, though.

Get it.  Read it. Have your students read it.  Good stuff. Opening Lines:
Dear John Paul and Theresa Wiggin,
You understand that during the most recent attempt by the Warsaw Pact to take over the International Fleet, our sole concern at EducAdmin was the safety of the children.  Now we are finally able to begin working out the logistics of sending the children home.
We assure you that Andrew will be provided with continuous surveillance and an active bodyguard throughout his transfer from the IF to American governmental control.

Okay.  You read it?  Good.  It is an amazing book isn't it.  I remember reading it when it first came out.  There were a lot of people ravenously waiting for the next book in the series to come out.  Before long, Card released Xenocide and Speaker for the Dead and they were good -- but they didn't have the same kind of gripping story that Ender' Game did.  Then, in 2008 (apparently -- I just discovered it last month in an awesome independent bookstore in Moab, Utah) Card came out with Ender in Exile.  I'll tell you what -- Ender in Exile is a much better sequel than the Speaker for the Dead or Xenocide.  Ender in Exile takes place just after the triumphant end of the Formic War.  The nations of earth are starting to fight over who will control the genius children who helped win the war.  Ender and his sister Valentine make the decision to leave in a ship that is carrying colonists to inhabit one of the dead Formic worlds.  The journey will take two years on board the ship, but while they are travelling, forty years will pass on Earth.  When they arrive, Ender is to serve as governor.  Unfortunately, the captain of the starship they are on has his own designs on that position.  How can Ender, a twelve year old boy, possibly outwit the man who has all the control (and also avoid an assassin who awaits him at the colony and negotiate his first romantic relationship.)

This book isn't' as good as the Rithmatist, and  it isn;t as good as Ender's Game -- but that still leaves plenty of room for it to be honking good.  This book is perhaps best for anyone who has already read and loved Ender's Game.  Nothing particularly objectionable here besides a couple of very occasional  vulgar words.  Too long for a read aloud, but excellent for a sixth grade and up classroom library. 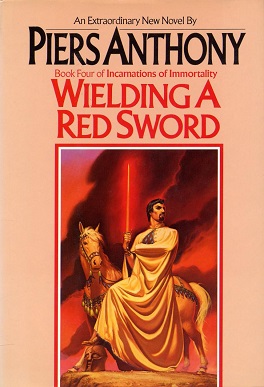 Opening lines:  It was a travelling show, the kid that drifted from village to village, performing for thrown rupees.  There was a chained dragon who would snort smoke and sometimes fire when its keeper signaled.

When I was in high school I think I read very book Piers Anthony had written.  I started with the gripping and hilarious Xanth series, then read several other books before I discovered his incarnations of immortality series.  I devoured those too.  But somehow the whole lot of them got lost in a move somewhere and it wasn't until I recently encountered this book in a bookstore that I remembered how much I liked it and re-read it thinking about its appropriateness for the classroom.

And that is where things get difficult.  It is an interesting book.  Mym, the main character is a prince who runs away.  He falls in love with a circus performer, but then ends up agreeing to take the mantle of the incarnation of War.  Soon he has a pale horse that can move astonishingly fast and a red sword that can stop time.  However, he finds it difficult to maintain relationships.  He also finds out that the incarnation of Evil is trying to manipulate him.

It is an interesting and fun premise and makes for a good fantasy novel, but i had forgotten the enthusiasm with which Piers Anthony descries the physical nature of War's interaction with several women who he becomes involved in.  I don't remember that affecting me much as a high school kid, and there are some interesting themes that work themselves out as War tries to figure out how physical attractiveness, intellectual interaction, and deep caring are parts of what makes love work.  The female characters in the book tend to be pretty passive and certainly couldn't stand up to Katniss, Triss, or Hermione Granger.  In fact is was somewhat startling to me to remember that just a few short decades ago there was a clearer divide between boy books and girl books.

I am not sure this one is suited for a high school classroom.  It is a good story, but perhaps best left for readers to discover on thier own.