Is friendship between a math nerd and an athlete even possible? 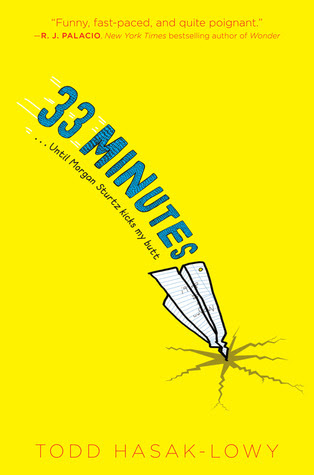 Opening lines:  11:41 AM "Think about this:  Had the British not won the French and Indian War," Mr Griegs says, "We'd all be speaking French right now."
Fact: I am in Social Studies.
My hand goes up.  I'm not sure I want my hand to be up, but too late.  It's up.

Sam Lewis is a seventh-grader.  A year ago, he and his best friend Morgan were an inseparable video-game playing team.  In spite of the fact that Sam was on the Math team and liked to do physics experiments for fun, and Morgan is more of an athlete, their friendship was strong.   Since then, things have gone downhill.  Chris, a new kid, showed up.  At first it was like the three musketeers, but gradually Chris and Morgan's friendship strengthened and Sam and Morgan's friendship waned.  But how is it that Sam now finds himself in a position where an accidental slip caused Morgan to think that Sam insulted him (which Sam kind of did, but he didn't mean it) and now everyone in school has heard that at the end of the day, Morgan is going to kick Sam's butt.  Sam's um,.. friend Amy thinks Sam should talk to Morgan and work things out, but Sam is reluctant.  On the other hand, the end of the school day is coming soon. What is going to happen.

This book is not the greatest middle school novel ever, but it isn't bad.  Sam is in a position that many middle school kids find themselves in.  He is struggling to figure out how this whole social life thing works, and finds that every time he thinks he understands social dynamics, he is wrong.  It is easy to root for Sam. His self-deprecating humor makes him a very sympathetic narrator, and the relationship between him and Amy is a developing middle school relationship that stays full of romantic tension without going anywhere.

The book jacket blurbs tell me that it is laugh-out-loud funny, and maybe it is, but the story his a little close to home for me, and I found it hard to laugh at Sam, even in the midst of a food fight.  My guess, though, is that most middle school kids will not have the problem I did and will find the story quite funny at times.  And I did enjoy the ending very much.

I found nothing here that I thought would prompt parents to object (though I have been surprised before).


Posted by Bill Boerman-Cornell at 1:05 PM No comments:

Three Fun Graphic Novels (that will not answer any existential questions).

This graphic novel is about the unlikely friends that develops between a witch who gets a job as a cafeteria lady and a girl named Madison who is in danger of flunking out of school.  When a spell goes awry and Madison gets turned into a toad, it is up the the witch to save her, over the protests of her dead ancestors who are angry that the witch is trying to help someone.  This book might contain a theme or two, but mostly it is just a fun story.

The illustrations are grey and angular and no one in the story is pleasant to look at.  It is a funny book at times, and the caricature nature of the illustrations might contribute a bit to that, but generally it seems to ma the at the words and images are not always supporting each other the way I might hope they would.

This book is probably best for third grade and up.  There is nothing particularly offensive in it.  The book does use the word "turd" once and the illustrations are creepy and grey.  The Witch character is neither admirable nor the sort of person readers would want to emulate.  She gets fired in the first five pages, then accepts the job as lunch lady only because she needs to be able to feed her pet bats.  Her spellcasting is often incompetent.  It is hard to imagine someone arguing that reading this book would lead any students in the direction of witchcraft -- it seems far more likely it would convince students of the value of getting a good job.  There is nothing truly problematic here. 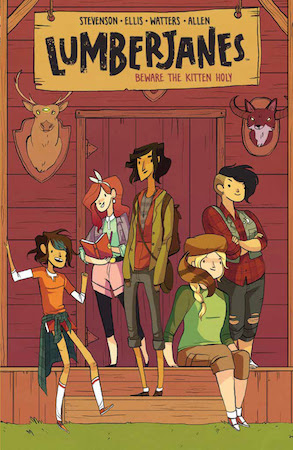 
The Lumberjanes are kind of like girl scouts -- except that the Lumberjanes are friends that fight three-eyed saber-toothed foxes, river monsters, evil eagles, yetis, and possessed boy scouts.  There is usually a mystery to be solved, and each of the girls contributes toward solving it.

This graphic novels was originally released as a regular run comic book, but the issues are here recast as chapters (each of which begins with a parodic page from the Lumberjanes' Handbook.) and it works better than most rebound regular run collections.

This is not a story that is going to have deep themes, character development, or one that will contribute to a profound understanding of our purpose in the world.  Themes of friendship and cooperation are present, but not really developed in a serious way.  I loved that there was some cryptography in the book and a few references to things like the Fibonacci sequence -- but these are not exactly common.

As you can see from the cover, the illustrations are cartoony and fun.  The story can be a little hard to follow, though, and at first it is kind of difficult to identify each character's uniquenesses in the midst of the frenetic fight scenes.  Eventually though, readers will catch on.

This one is perhaps best for fourth grade and up (I know some high school students who are fans) and probably more interesting to females than males.  They are unlikely to be challenged, partly because Stevenson and Ellis use the time honored comic book tradition of substituting made up oaths for more vulgar terms.  In this case, the girls tend to say things like "What the Mae Jamison is going on?' -- substituting famous females for oaths.

This is a fun series and may be just the thing for getting some reluctant readers who liked Babymouse and the like when they were younger to pick up a book again. 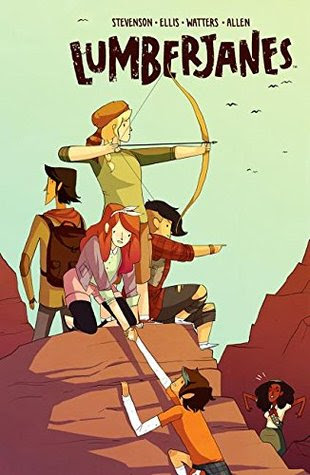 In the second book of the series, the Lumberjanes fight insane dinosaurs, befriend a were bear, and deal with the fact that one of their number may be magical, evil, and or a Greek goddess.

As with the previous book, this one contains a lot of adventure and action, and would be a good addition to a classroom library, but there isn't enough here to focus on as a reading circle book or a book to study in class.

Posted by Bill Boerman-Cornell at 3:13 PM No comments: