Anyway, George O'Connor has at least four books out so far:  Zeus: King of the Gods; Hera: The Goddess in her Glory; Athena:  Grey-eved Goddess; and Hades: Lord of the Dead with Posiedon due out any day now.  Each book brings together a plethera of different sources to present a completely compelling tale of that Greek god or goddess that usually frames them in a new way. 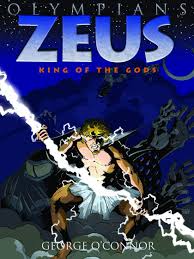 In Zeus, for example, the creation story is told, including the story of the youg gods and godesses rebelling agains their evil father Chronos.  What I found fascinating about this book was the depiction of Zeus as a young man (actually, he looks a little like a California surfer dude.)  Zeus's youth and immaturity grow in the course of the book into responsibility and determination.  The drawings are amazing and give a sense of the drama and excitement of the battle.
The book also shows the beginning of Zeus's courtship of Hera.  Their relationship is continued in Hera. 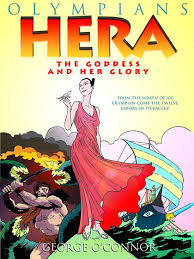 I wish I knew how O'Connor manages to pull it off -- but this has to be the most sympathetic portrayal of Hera I have ever read.  Usually she comes off as an annoying, crabby, shrewish wife (which has always seemed unfair to me given that Zeus has got to be the definition of an unfaithful husband. ).  Here we see how smart (and kind) she can be as we follow the labors of Heracles.  Hera works behind the scenes to ensure that Heracles learns through his labors to use not only his brawn, but his brain as well (so that he can live up to his name and truely be "The Glory of Hera").  When I field tested this book on upper elementary students I was amazed how carefully they read both the text and the images. For that reason, I really appreciate O'Connor's care in depicting (or actually not depicting) violence and sex.  There is plenty of violence here, but little gore.  And although we see Zeus unfaithfully wooing (and wooing, and wooing), that is all we see. 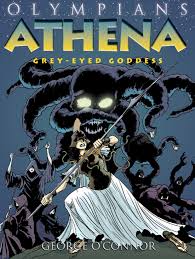 The care O'Connor takes in constructing his stories comes through clearly in the way he weaves together the story of Athena.  Each part of the story, each page layout, and each individual panel contribute to the overall tale.  It is nearly poetic in the way that nothing is left out.  This story weaves together several stories including Perseus, Arachne, and a couple of different versions of how Athena got the name Pallas -- but the whole thing works together as one coherant narrative. 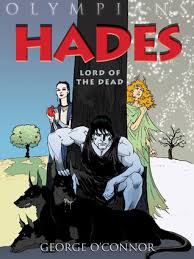 O'Connor has conceived of these books as a connected series and is passionate about getting them right.  I have also been amazed how they keep getting better with each one.  I found the story of Hades to be the most compelling and well developed so far. Based on what I have heard about the upcoming one, Poseidon, which is due out this coming March, it may surpass his previous work yet again.   O'Connor tells the story in the first person from Poseidon's point of view.  This stuff just keps getting better and better.

Collectively, these would be most perfect for language arts teachers, but social studies teachers could use them too.  I have seen an excellent fourth grade reader devour these and have also had good reports from my high school daughter and my college students who have read them -- so they really appeal to a pretty broad range of readers. Go buy them from an independent bookstore near you as soon as you can.

Posted by Bill Boerman-Cornell at 9:48 AM No comments:

Beat the Turtle Drum vs. Bridge to Terabithia

So last week I read two classic Newbery-award-winning books.  The first is one you have probably never heard of, the second is one you might have on your shelf.  The first one is horrid.  The second is excellent.  Comparing the two gives one an interesting look at what makes a book last and what doesn't.

Constance Greene's Beat the Turtle Drum (1976) is about Jess, who appears to be in fourth or fifth grade.  She saves her money for a couple of years until she has enough to rent a horse for a week. She has an amazing week, caring for the horse in her garage, giving kids in the neighborhood rides, and generally glorying in being the owner, at least for a time, of a horse.  Then, at the end of that week, while playing with her sister, she falls out of an apple tree and dies.  Her life seems meaningless because it is.  It doesn't change the grumpy neighbor across the street, it doesn't change her parents and it seems to only embitter her sister.  And that is the end of it.  Death is random and life sucks and that's the way it is.
After reading this book I didn't feel like I had recieved an epiphany about the nature of reality.  I suspect the author had hoped to teach children something about the nature of the reality of the world we live in.  In fact, though, I doubt children need any further lessons in this part of life.  I suspect they are already too familiar with it. 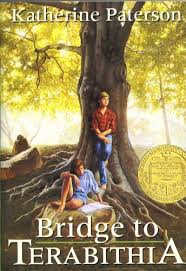 Then I picked up The Brigde of Terabithia which I am ashamed to say I had never read.  Before I started it, I checked the copyright date.  It was published a year after Beat the Turtle Drum, but Terabithia is everything that Turtle Drum is not.  Here is a story of real friendship, of two kids growing and gaining confidence in themselves while holding on to the joy of imagination.  There are themes of giving and caring and forgiveness along with some funny bits about revenge.  And when the death comes in this book, it hurts far worse than in Turtle Drum. But it is also a death that, while senseless, somehow also means something, in that it changes Jess and also the community.  I confess to kind of crying in the end.  (Actually, since grown men don't cry, I will only confess to feeling that kind of runniness in the nose that indicates that I would cry if I weren't so manly.)  This book rocked.

(A Bridge to Terabithia is by Katherine Patterson and is best suited to strong readers in later third grade through middle school readers --though I liked it and I am 45 years old.  Probably best suited for language arts classrooms.)
Posted by Bill Boerman-Cornell at 12:12 PM No comments:


Tis review can be found at

Posted by Bill Boerman-Cornell at 10:57 AM No comments:

This review can now be found at

Posted by Bill Boerman-Cornell at 3:50 PM No comments: