Opening Lines:  “Happy Year of the Rat!” Dad said as he toasted us with his glass.  The clinking noises filled the air as the adults knocked glasses of wine against the kids’ cups of juice.
As in her previous novel in the series, The Year of the Dog,  Lin uses short episodic chapters to tell the story of Pacy. Pacy is afraid of losing her best friend (Melody may have to move away) and is excited to explore her dream of one day becoming an author and illustrator and at the same time plagued by doubts. Lin includes regular small sketches in the margins as we go, which may help young readers continue to picture the story throughout the chapter.
There are some minor themes in this story – how friendship can survive separation, the importance of family, and so on, but maybe not enough here to fully warrant an in-class study.  This would, however, make a great read-aloud for second and third grade.

Opening Lines:  “Pink, pink, pink,” I said over Ki-Ki to Mom.  Lissy, Ki-Ki, and I were sitting next to each other on an airplane, and we were wearing the same hot-ink overall dresses, the color of the neon donut sign in the food court back in the airport.  “Why did it have to be pink?”
Pacy and her family are going to Taiwan for a month, to visit relative that Pacy has never met  Pacy is more than a little nervous about the food, the fact that she doesn’t speak the language, and is worried that her artistic talent may be disappearing.
Like the other books in this series, there is no climactic battle against hordes of aliens nor a family crisis that tears the main character’s world apart.  Rather, these are the sorts of everyday challenges and problems that many elementary school kids have to deal with (and a few they do not – like accidentally eating chicken feet).  And I think that is why so many second and third graders like Grace Lin’s books.  There is a calmness to them.
As in previous books, the text is broken up with pictures and the story is broken up with the tales her father and other relatives tell.  This would also make a good read aloud book. 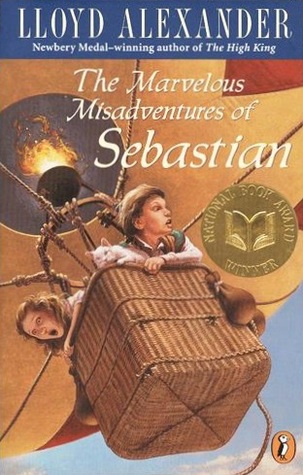 Opening lines:  “From his perch on the window ledge of the musician’s quarters, high under the East Wing Roof, Sebastian’’s quick ears caught the drum of hoofbeats.”
Sebastian, who lives in a vaguely medieval world of uncertain historical period, gets fired from the Baron’s orchestra and takes to the road where he loses his violin, meets a princess, and ends up as a clown in a theater troupe.  While I can’t say this book made me laugh out loud, it certainly had me grinning a lot of the time. Sebastian doesn’t take anything to seriously as he careens from one situation to the next. and along the way, his missteps just might save the kingdom.
This book is not a classic.  It was published in 1970 and won a National Book Award, and my guess is that you haven’t heard of it.  But Lloyd Alexander is an excellent writer, and some young reaer might enjoy a simple and funny story without supercharged mutants battling cyborg aliens with the fate of the galaxy at stake.  For that reason, this one might be worth picking up.
There is nothing objectionable in this book.  It would apply to some third, foruth, and fifth graders.

Posted by Bill Boerman-Cornell at 6:43 PM