A alien scientist named Bloort 183 (who looks a bit like a one-eyed starfish mounted on a stack of inner tubes) has just put the finishing touches on the Glargalian Holographic Museum of Earth Evolution and is giving a tour to King Floorsh 727 and his son, Prince Floorsh 418  and on this tour, Bloort explains how different life on Earth is than it is on Glargal where all life reproduces asexually and without variation.  The result is a remarkably interesting and remarkably in depth book,
Evolution:  The Story of Life on Earth (2011) by Jay Hosler, Kevin Cannon, and Zander Cannon.  New York:  Hill and Wang

Hosler uses this contrivance of aliens trying to understand life on earth (as Mark Schultz, Zander Cannon, and Kevin Cannon did with the earlier book in this series, The Stuff of Life:  A Graphic Guide to Genetics and DNA) as a great way to explain complicated scientific ideas without too much jargo and in a way that offers a full explanation without insulting the readers' intelligence.  It also allow for a overarching story that we can escape to every now and then when the scientific explanations get too heavy.  Hosler and the Cannons (who are not related by the way -- they met in art school because they have the same last name and found that they collaborate rather well) also include a fair mount of humor which helps the science go down easier.
The images allow for the sort of visual aids that a really excellent science teacher would draw on the board (although here they are much easier to identify than the stick figures that seem to populate blackboards).  The science is extremely solid and accurate (Holser is a Ph.D. in Biology) but presented in a way that may really open science up for readers who haven't yet realized how cool it is.

It has always seemed to me, by the way, that the creation-evolution controversy didn't make much sense.  After all, many of the pioneers of evolutionary theory were Chrisitans, or at least theists, and saw no reason why a divine creator couldn't use natural processes to get the job done.  No matter -- that really isn't what this review is about.  Jay Hostler (writer of the amazing graphic novel on the biology of bees--Clan Apis) and Kevin Cannon and Zander Cannon (both of whom worked on the excellent graphic novel about the space race T-Minus) have created a brilliant book that explains the ideas behind genetics,  If you think evolutionary theory is a lot of hooey, read this book -- it won't necessarily convince you of anything, but it will describe the theory fully enough that you can at least understand what you disagree with.  If you have no such concerns, read this book -- you'll discover that creation is an amazingly intricate and connected thing --even more so than you thought.
Posted by Bill Boerman-Cornell at 10:49 AM No comments:

Best History-based Informational Text Ever! (Informational text is the new term for what we used to call non-fiction books.)

During World War 2, the Germans were working on developing an atom bomb.  They had a factory built into the side of a mountain in Norway that was manufacturing the heavy water that the Germans planned to use to insulate the reaction chamber and start a nuclear reaction.  The American and British intelligence forces managed to paratroop in a handful of escaped members of the Norwegian Resistance.  After a batched landing that was miles off of where they were supposed to be, these men skied down a mountain, through a forest, and up a frozen river.  They crawled through a series of ventilation ducts and planted explosives.  They escaped before the blast and hid out in the woods.  After weeks of near starvation and freezing to death, constantly risking being caught by German patrols, the Norwegians managed to set up a radio and get word back to Britain.  It turned out that British intelligence already knew about the explosion, but they also knew that the Germans had recovered much of the heavy water they had already produced and planned to transport it out of Norway the next day.  It was up to the half-frozen, hungry, desperate Norwegian group to stop that shipment. 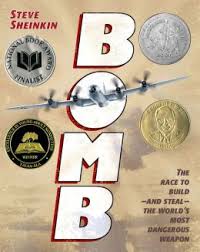 I know, this sounds like the plot to a war movie action thriller (maybe A-Team II), but it really happened.  It is just one of many stories described in Sheinkin's new book.  The book describes the race between the Americans, Russians, and Germans to build the first atomic weapon.  There are amazing stories of spying and counter-spying in here that I had never heard of before.  This book shows middle school and high school students that history is not just a series of uninteresting treaties and constitutional amendments, but rather it is a fascinating story of moments where the actions of a small number of really brave or smart people make a huge difference.
Historians might point out that there is more to history than this sort of moment and I am sure they are right, but if you want to kindle in students an intense interest in reading about history, this is your book.  It is wonderfully written and illustrated with black and white photographs at the chapter breaks.  If you teach history, get hold of this.  If you like reading about history, get hold of this.  If you like reading -- get hold of this.
Oh, and I am not going to tell you what happens to the desperate Norwegians.  You'll have to read that on your own.

Posted by Bill Boerman-Cornell at 1:21 PM No comments:

Doxiadis, Apostolos; Papadimitriou, Christos H.; Papadatos, Alegos; DiDonna, Annie (2009)  Logicomix: An Epic Search for Truth.  New York: Bloomsbury – excellent story about the life of Bertrand Russell and his attempt to discover truth through mathematics, philosophy and physics.  ( I know that doesn't sound so exciting, but it really is.  This would be a good one for convincing students that math actually is pretty iinteresting -- once you get into it).  Good explanations of geometry, paradox, infinity, and the difference between computation and higher math – with a fair amount of secrecy, scandal, madness and mystery mixed in.

Colfer, Eoin, Donkin, Andrew; Rigano, Giovanni; & Lamanna, Paolo. (2009) Artemis Fowl:  The Arctic Incident: The Graphic Novel.  London: Penguin
Artemis Fowl, kid super criminal mastermind once again teams up with Captain Holley Short, a fairy who is part of the Lower Elements Police RECON unit (that's L.E.P.Recon -- get it?), the mountainous bodyguard Butler, Foley the centaur-inventor and the rest.  Though it lacks the cryptography elements of the text version, it still has Artemis’s use of logic.  Fun read. Ottaviani, J. and L. Purvis (2004). Suspended in language: Niels Bohr's life, discoveries, and the century he shaped. Ann Arbor, GT Labs.
Holy cow!  This is the best science and math GNs I have yet encountered.  Perfect for a high school physics class.  Explains scientific theories and how they came to be in the context of Bohr's life.  This GN totally rocks -- especially the barometer story told the end.  Nerdvana! 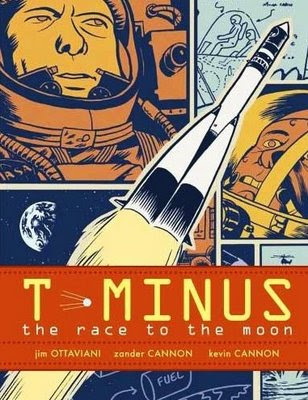 Ottaviani, Jim; Cannon, Zander; Cannon:  Kevin.  (2009) T-Minus:  The Race to the Moon  New York:  Aladdin.  Back int eh 1950s, 60s, and 70's, when slide rules walked the earth, mathematicians calculated pretty much every aspect of the space program by hand.  There were the days when the engineers were the heroes, and their calculations were all that stood between the astronauts and firey death.  This is the good stuff.
.

Got any other suggestions?  Feel free to leave titles in the comments section below.

Posted by Bill Boerman-Cornell at 2:10 PM No comments: